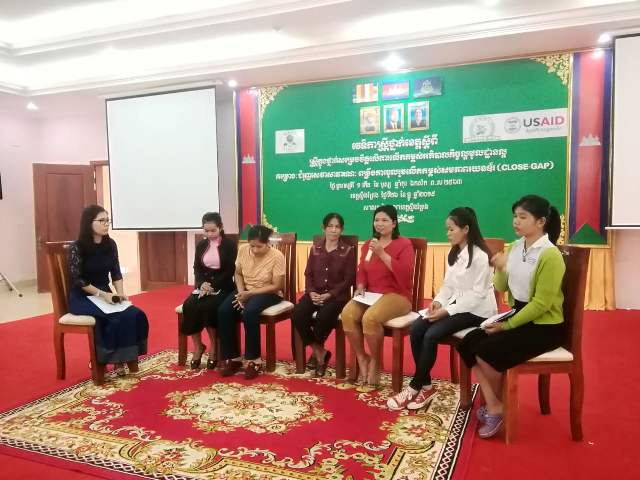 32(24F) out of the 50 Community Facilitators (CF’s) have received coaching from the project coordinator and the Project Officer. The remaining 18 CF’s were absent due to migration to another province, alternative employment and marriage. Many people are also busy with rice and cassava harvests. The training was based on the previous requirements identified from CFs, including leadership skills, how to be an active citizen and social accountability as well as public speaking. New topics were then taught on advocacy skills and the way to use them in the community. The training also included information about CEDAW. A training monitoring plan was implemented to find out how effective the training was, by obtaining a baseline figure of knowledge and then testing the participant’s knowledge after the training to see the improvement. The majority of participants showed an increase in knowledge following the training. 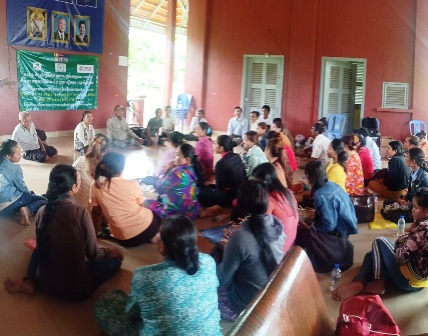 We took the CFs one time during the Study to 3 communes in 2 districts of Stungtreng to see and learn from 3 women working as leaders in their communities. This event had 44 CFs(04males)  participants. We spent 3 days in three different communes ( Ou Mareash, Ou Reay and Ou Russey Kandal communes) which are led by females as commune council leaders, CCWC, village leader, eco-tourism CBOs. Throughout this event, CFs have learned about women’s leadership skills, the role of CCWC in school enrolment, counseling with women or mothers during pregnancy and giving birth, importance of birth certificates for their kids, Social services, domestic violence resolving, care for orphaned children, children dropping out of schools, lack of teachers in schools, commune leader selection, meeting with CCWC about gender issues, gang prevention, drug use and other challenges within those communes.

The events within the 3 communes raised the following questions from the CFs:

This event happened on 26 July 2019, with Sweet FM radio 100.50MHZ with cooperation from FM 89.50 and rebroadcast on 26 August 2019.   Four female CFs, four radio operators, 1424 listeners, five callers, and fifty-three people clicked “Like”, five people left comments, and seventeen people shared this information on Facebook. (See this link: https://www.facebook.com /fm89.50 /videos /389 43 7495078975/) under a program called Gender mainstreaming awareness to the citizen and report all cases of violence in families, especially men using bad behavior with family and harming women. Promoted understanding of the consequences of domestic violence, legal knowledge, how to ask for intervention from local authorities.  There were some recommendations from listeners [do not discriminate against women and help and encourage them to participate in country development work. Men must support women at home without discrimination. To be aware that men and women have equal rights]

Every month female empowerment and gender equality is promoted on Radio Sweet FM 100.5mh. The radio show is 1 hour long and is regularly repeated during the month. A variety of CFs, community and provincial leaders as well as family members talk on the show in order to raise issues such as violence against women and children and this quarter a new topic called ‘we can do’ was introduced talking about safe migration when travelling to neigh bouring countries or within Cambodia. Subject matter included paying for transport, being forced to overwork, issues about sending children away to work and being subjected to sexual harassment and abuse. Many families reported a lack of reporting of the abuse due to the authorities being scared of the repercussions. Advice was offered on seeking help from NGOs before committing to work for companies through illegal middlemen and migrating to other areas. The talk also recommended consulting with local authorities about the recruiting companies and any issues raised by obtaining contact numbers of the local authorities and NGOs that can help so that reporting can be made immediately. The advice was also given about high risk strategies of sending young people to work outside of Cambodia. Through monitoring feedback, we can see that for the live program, 148 people listened to it, 02 people called in, 08 people interacted on FB, 04 people also shared the program on FB. The program was recorded and played again. Another program included information on the members in a family who are affected by domestic violence against women. A further show focused on domestic violence within the family and the impact on the children within the families. For example, issues with school and changes in behaviour from the children. The show recommended that women should ask for intervention from local authorities and neighbours and that they do not have to keep quiet. It can happen to anyone and it is not only them that is suffering. Speakers included radio staff and community facilitators. For this program the numbers were: 111 listeners, 2 women called into the program, 10 people interreacted on FB and 04 people shared the program. Key issues raised from the radio programs this quarter included: trafficking – being aware of people attending villages to procure children, violence against women, and ensuring reporting to local authorities of any issues 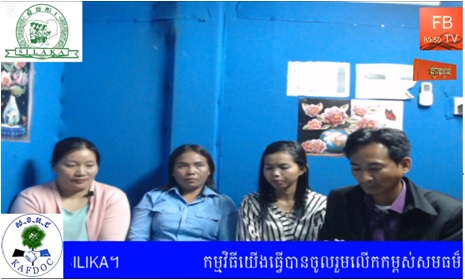 Community forums in 5 communes were held, but another 05 communes were postponed until after Covid 19 restrictions are lifted. The participants in the community forums amounted to 43 individuals (F:28) CFs 21,(F19) 2 NGO staff (F2) 20 local authority staff (F07).Topics for discussion were drug use , gambling , education, village security, health, roles and responsibilities of the CWC. Some of the issues raised were that many children drop out of school and are absent, pregnant women don’t go to health checks. The local authorities stated that following on from the meeting they will look to do home visits to consult as to why the women don’t attend the health centres. The health authorities stated that there is a small budget to help women in poverty. With regards to village security, it was raised that the contact numbers for the authorities are not easily available and that it would be a good solution to put the number in the market and in other areas that are busy which will enable people to access the number. On a very positive note, it was also noted that there are many CFs active in the area and that on a community level, it would be good to have representation from women on the community councils. Many questions were raised with regards to integrating issues surrounding women and children into the community plans, how authorities plan to work with the communities, empowering women to become community leaders, issues with the road surfaces – ensuring that children are able to attend school easily etc as well as domestic violence questions and how the local authorities will deal with the issue. Conducted one time commune forum for 10 communes in two different districts. There were 86 participants (51 females) invited to these two Commune Forums, The participants in many various positions: CCWCC and its members in 10 communes, 2 deputy governors, two Silaka staff, Youth Groups, teachers, school directors, commune police, first and second lieutenants, commune chiefs, village and citizen leaders. These commune forums were conducted from 9: to 12 pm under the delegation of the deputy of district governors who gave the opening address. We divided into small group discussions: five groups of local authorities on the topic of commune service delivery to respond to the need of women and children, the next plan and resolving previous challenges. There were five groups of Cfs and one group of youth.

Kafdoc staff participated in the Provincial Committee for Women and Children (PCWC) meeting that was held in a provincial hall of Stung Treng province. There were 27 members (17 females) in the meeting at 8 to 12 pm, led by H.E. KutBunmy under the following agenda: Report from members on challenges and next plan, Close –Gap has 10 minutes to share its activities to all participants. The meeting members from the department of women affairs announced about the training courses to women adult groups, widowed groups, and orphan groups, especially people with disability. As a result, eight people from 2 villages received training.   The five trainings on entrepreneurship were provided to 433 schools students in lower secondary schools. 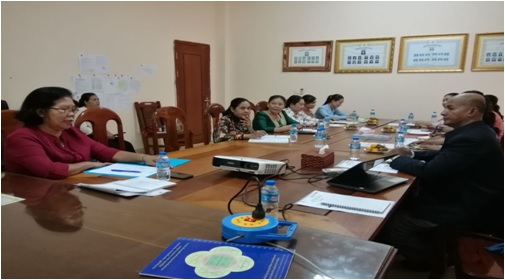 District Reflection and Refreshment meeting with our CFs (DRR)

The event was conducted in two different locations for CFs. There were 38 Fs (29 females) 2kafdoc staff. The aim of DRR was to remind the CFs of the relevant work of Close_GAP in their communes, any challenges, and resolving problems.  The topics in DRR meeting were: Close-GAP achievements, risks, and lessons learned, Group discussion on risk challenges and barriers, reminder of roles and responsibilities of CFs and CCWC, methodology in speaking to local authorities calmly, without making them angry. Conducted monitoring of CFs work in their communities, in particular, their awareness and next plan activities and also check again all inactive activities of CFs under Close_Gap.

This activity was held in one district of Seimbok district with 20 CFs(F17). One district was postponed after the Covid19 restrictions were introduced and will be restarted once the Government have reduced the risk. At this meeting we reflected on the Commune Forum in Seim Bok district, its achievements and project challenges, and shared experiences on the work Campaign in Kampot , revised role and responsibility of CFs and CCWC and responses from local authorities and setting up next plan

129 participants (F112). 17 CFs (F15) worked to cooperated with 08 local authorities of 05 communes in Seim Bok district to promote Equity of Gender topic, human rights, impact of domestic violence in families and Challenges of children dropping out from schools, in particularly in primary schools.

Women group set up in 02 districts

The Women Help Women Group-WHWGwas developed by 01 KFDOC staff and 03 Silika staff on 25 July 2020 in Stung Treng province in AOC organisation’s office. This group was formed with 11 CFs and 03 youth. The purpose of this group is forwomento help their members in their communities, they can share their lessons learned, local and provincial information to community women members or vulnerable women and they also have  discussions amongst the group to help each other in villages and their communities.

This forum consisted of 65 participants and 52 Females.  Including 3 F (PCWC) 5/ 4F (CCWC) 32/ 28 F (CFs), 6/4 F (Youth) 4/2F (KAFDOC) and 3/2F (SILAKA)This forum has provided the good opportunity for the community people who have problems and got some information from CFs showed their real issues for the authorities to find the way to clear and resolve by discussion through inviting the relevant position sector officials  at the same time. There were 4 main problems affecting the community  women and children Brought​​ into the forum and discussed as followed:

1-Domestic violence:  Excellency Kut Bunnmi  advised that all people who have problems caused by violence, should report it to the commune authority or to the court and they  should also keep the first official minute letter and specific evidence to help  resolve cases. He also called for people to take care of each other.Solid solidarity is necessary for harmonious living.

2-Student dropping out of school and overuse of SMART phones. Deputy of POE, Ms. Thyda responded that some​ families are poor and migrate, while others cannot afford to send their children to school because they need them to work and earn money to support their families. However, we  prepared Children councils and some school teachers  help  them learn at home.For students with SMART  phone problems, the Deputy of POE, Ms. Thyda  stated that it was not always a bad thing,  and now that almost all districts and communes of our country have the opportunity to connect to the internet service network, and we are also affected by COVID-19, that the SMART phone is important  for public education, and  some students used their SMART Phone for learning online. 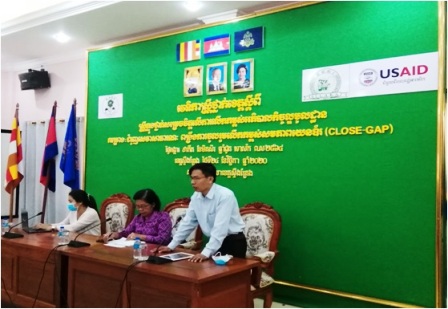 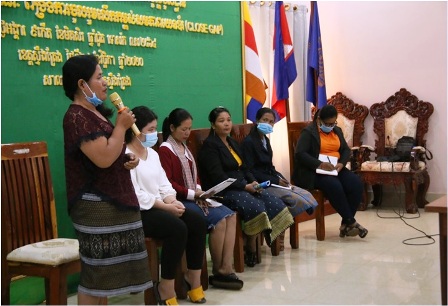 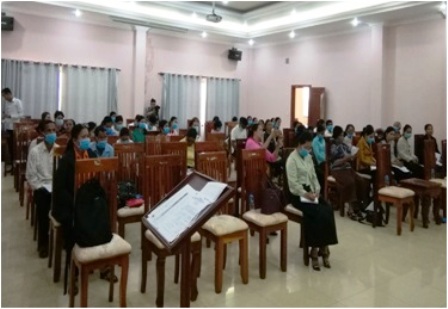