KAFDOC works in order to improve governance and ensure that it is participatory, consensus oriented, accountable, transparent, responsive, effective and efficient, equitable and inclusive. Its aim is to make sure that the views of minorities are taken into account, that corruption is minimized, and that the voices of the most vulnerable in society are heard in decision-making. Therefore, governance can be responsive to the present and future needs of the communities.

KAFDOC-CED’s staffs, in cooperation with CCs, conducted CRT selection meeting in 45 villages of 15 target communes in 4 districts/municipalities in Kratie province (3 villages per commune). CCs in each commune asked the village chief to invite citizens to the meeting. All meetings were held at a place accessible to the majority of citizens. In the meeting one potential representative was selected based on criteria set in the project launching workshop. The CRTs were selected by the participants in free and fair election. The people elected one person among 3 or 4 volunteer candidates. 45 elected CRT members (17 female) are grassroots people, CBO (Community Based Organizations) members and youths.

As citizen representative in community, CRT plays key roles in engaging citizens with local authorities through dissemination, giving feedback, awareness raising, collection of information, and sharing information to citizens after attending the training on various topics: public forum, reflection workshop, meeting with relevant stakeholders, and especially the result of commune council monthly meeting. CRTs were also in charge of integrating people’s needs in Commune Investment Plan (CIP) and District Investment Plan (DIP) in 2012. In addition, CRTs helped to raise awareness of the citizens at the local level on the importance of the people’s engagement to improve commune service delivery, and participate in public forums. Consequently, the citizen has been confident in giving feedback to service providers in the commune public forums and holding local authority accountable, therefore following the governmental strategic plan for sub-national democratic development. 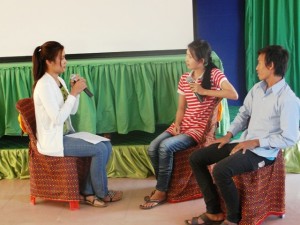 This training was held in Kratie municipality by KAFDOC and CED with the cooperation of the Planning and Investment Office of the provincial authority. The training provided awareness on good governance, decentralization and de-concentration to 72 participants (22 females) to promote good governance and to help grass root people to increase their awareness on the importance of data dissemination.

Fifteen meetings were organized in total to discuss Commune Investment Plans implemented by CCs and 45 CRTs within 15 communes, 45 villages, and with 1,525 participants (590 women). People from 3 villages gathered to assist to one orientation meeting (Russey Keo commune), which then organized meetings in each village for specific purpose.

After the CIP promotion, the community people (project’s beneficiaries) and CRTs had a good understanding of CIP/CDP, and of the roles and functions of the CC. They received a great amount of useful information relating to commune cash flow within the Commune Development Plan (CDP). They requested the Commune Council to include in the Commune Investment Plan their needs or concerns, especially the lack of village meetings to allow grassroots people to participate in development activities.

In March 2012, in Kratie province, a training course on Social Accountability, Good Governance and Mediation Skills was facilitated by KAFDOC-CED and an expert from Planning and Investment Office (PIO).

The training’s purpose was to strengthen the social conceptual framework and processing tools, as a model of procedure to disseminate awareness and experiences to grassroots people in communities. 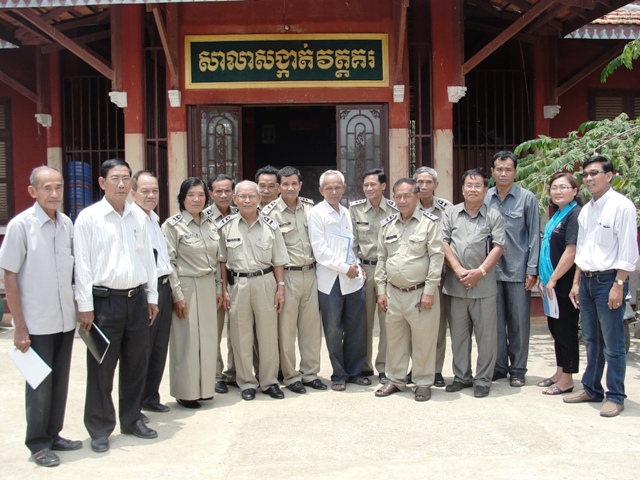 The exchange visit was organized on April 3-6, 2012 to AMARA organization in Battambang.

In June 2012, data collection activity was conducted in 45 villages by 45 CRTs, using door to door method. CRTs were the key actor in collecting information on Commune Public Administration Services by using questionnaires developed by KAFDOC-CED project staff members. This activity aims to look for the strengths and weaknesses of the commune council/sangkat’s activities, and satisfies the need of assessment requested by citizen in the target areas. 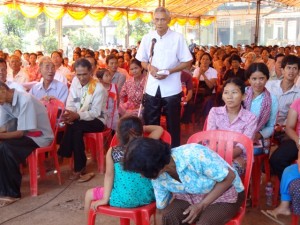 In August 2012, after the data collection and citizen quarterly meeting, 15 commune dialogues were organized. The first dialogue was held in Russey Keo commune and observed by all project staff members who were involved in organizing the next dialogues in other communes. The report of data collection on commune administration service was provided to each participants and guest speakers in the commune dialogue. One representative of 3 CRTs presented their reports to the participants. There were 3 guest speakers – one district governor, one Public Administration Officials (PAO) and one commune council leader – in each dialogue who played the important role of answering all questions stated in the reports and personally raised by participants. As a result, a total of 1,496 participants (663 female) attended all 15 commune dialogues. This figure includes 296 people more than the expected number.

In July 2012, KAFDOC-CED’s project conducted 45 village meetings in 45 target villages with a total of 2345 citizens (1107 females) who were invited to these meetings. They received information about the gaps in the various commune administration service. Furthermore, they had a chance to ask some more information, where they noticed a lack of data, and which are very necessary for CC administrative public service improvement. Their voices were displayed into a consolidated record and provided to all participants at the beginning of the dialogues. 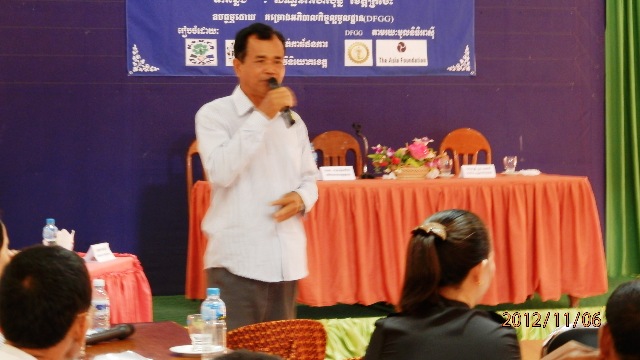 On November 2012, in Kratie province, a provincial dialogue was organized, in which  local authorities and community representatives participated to discuss and resolve some issues raised by citizens to local authorities. This one-day event was chaired by Mr. Cheak Meng Heang, deputy provincial governor of Kratie, Mr. Kry sopheap, program officer of The Asia Foundation and Ms. Ngoun Sophany, executive director of KAFDOC; and jointly organized by KAFDOC and CED and Provincial Planning and Investment Office (PPIO).

A lot of issues were raised to the guest speakers during the workshop, such as:

The one day-provincial workshop attended by high ranking local governor, district councils, district governors and commune council members got a remarkable result through active responses to all participants’ concerns and questions, including CCs and CRTs.

There were 2 provincial level reflection meetings. The first meeting was held on November 22, 2012 and the second one was held on December 27, 2012 with a total of 121 participants (31 female).The guest speakers were vice-provincial governor – Mr. Va Thon, district councils – Mr. Thung Hul, Mr. Pech Phan, and Mr. Pen Ratha, vice PPIO and co-executive director of KAFDOC and CED. The main agendas were:

4) Open mind discussion in plenary for participants to express their commitment or willing for the next phase of project activities if the project gets a second phase.