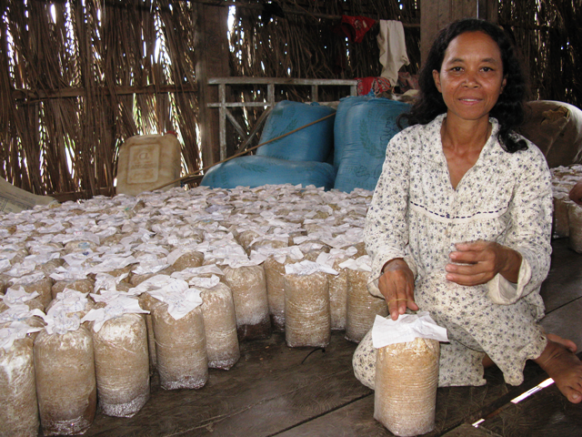 This mother of four, who used to rely entirely on rice growing, says “I had previously been worried about not being able to produce enough food to support families. I have no other means to earn income to supplement food shortage, to afford clothes and school materials for the children.”

After having learned all the techniques and having received financial support from KAFDOC of 500,000 Riels ($125.00), Phally purchased raw materials such as sawdust and mushroom-spores, to finally start her own mushroom growing business. One month later, she was able to collect mushrooms not only for her and her families consumption, but she also had some income because she sold mushrooms to her neighbours. She sold 5000 to 7,000 Riels per Kg of mushroom which, based on her calculation, allows her to earn around 20% profit. She is now expanding her business by increasing the productivity to create more income. In addition to earning more income from the mushroom growing, Phally saw the benefits of using the residues left from the growing for growing other vegetables such as water melon, pumpkin, cucumber, and morning glory around the house, which helps increase food production for her family.

Phally goes on : “Mushrooms are always in high demand.   don’t have to sell it at the market as people come all the way to buy them at my house. Sometimes I feel so sorry that I could not produce enough for them. The profit I generated from mushroom growing has drawn my husband’s interest in supporting me to expand the cultivation. Before he did not appreciate my effort, but now he does. He helps me to build a new shelter in front of the house just for growing mushrooms. I am very happy that my husband joins hands with me. It makes things a lot easier for me and we can grow more.”

The families next plan is to buy a piece of farm land which is located far away from home to expand the mushroom cultivation and to maximize the use of their half-hectare farm land next to their house for vegetable growing.

She went on: “I worked very hard at the beginning and felt a lot of pressure as my husband was so indifferent to what I was trying to do. I was afraid of failure, of course. But now I am very happy and feel confident to produce the mushrooms and earn more money from it.”

Since then, the income of her family has gained around 10,000 Riels per day. Before that, she earned almost nothing. They also set aside some extra money to expand the mushroom growing and to support their children’s schooling. Phally concluded: “I would like my four children to stay at school and I want them to have good a education, so they will have a better future. This dream will come true as my family now, through mushroom growing, can generate stable income and that is enough for me to keep them.  Besides, I am delighted by earning money this way. It is very profitable. I work from at home and at the same time I can take care about my house, do housework as well as having time to take care of my children.  All of this is because of the support I received from KAFDOC/ActionAid and Ms. Soknin – a model farmer who taught me these valuable mushroom growing techniques.  I’d like to thank them all for all the support and their generosity, which has changed my family life.”