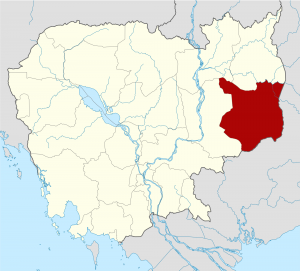 Mondulkiri is a province of Cambodia, bordering the provinces of Kratie to the west, Stung Treng to the northwest, Ratanakiri to the north and the country of Vietnam to the east and south. The capital is the town of Senmonorom. Mondulkiri is the most sparsely populated province in the whole country although being the largest province in Cambodia.

The population lives off the land, planting rice, fruit trees and a variety of vegetables. Others grow strawberries, coffee, rubber, and cashew nuts. The villagers also depend on the collection of Non-Timber Forest products, but the harvest is decreasing from year to year due to deforestation. There is very limited participation of farmers to participate in the planning and decision making relating to commune development. Fifty nine per cent of the 50,000 population of Mondulkiri are below the poverty line.

In Mondulkiri, KAFDOC works in: